Society community - sign up now for your free 7-day trial! In the past few years, a number of services and techniques have become increasingly popular and requested by clients. Balayage, with its natural, sun-kissed look and diminished lines of demarcation, is an excellent example of something that didn’t really exist a decade ago, but which is now a go-to service for many clients.

The popularity of the root smudge and shadow root, it can be argued, sprang from many of the same trends that led to the dominance of balayage. In fact, both services are typically used to “finish” other treatments, such as balayage or foilyage, particularly because they work together so well.

But what, exactly, is the difference between a root smudge and a shadow root, anyway? Here, we take a closer look at both terms to help you understand them so that you’ll always be prepared to communicate effectively with your clients about their hair goals.

What is a root smudge?

A root smudge is a technique used specifically to blur lines of demarcation. It involves applying a color formula close to the client’s roots, and then “smudging” it into the shaft of the hair. This creates a softer transition between the root and the lightened hair. It is often used after a foiling technique to blur lines and create a more seamless blend.

If you’re new to the technique, there are a lot of great root smudging tips to keep in mind. For example, using a translucent color line that has no ability to lift is the best option. It fades beautifully and therefore makes it easier to lift through at the next appointment. It’s also important to master a variety of root smudging formulas so that you have the confidence you need to be successful.

When To Do A Root Smudge

A root smudge is best suited for when a client wants to achieve a more blended root after foiling, or when they simply want a more seamless blend after another service. You can also use this technique to create more depth or tonal change on someone who doesn’t like their natural tone. On some clients, especially blondes, this can be used to slightly blend and cover grays and make things a little softer.

What is a shadow root?

A shadow root is a technique that is used to customize color and achieve a perfect blend after lightening.

Like a root smudge, the shadow root diminishes the lines of demarcation between the root and the lightened hair. The key difference, however, is that the levels between the natural and lightened area are often quite different, with the root being much darker.

The shadow root is a wonderful technique to learn in order to make that transition a little less painful. It eases the grow out process and makes maintenance much smoother.

Note: A shadow root should always be performed on shampooed, rinsed, and slightly damp hair. This ensures that there is no leftover lightener that might otherwise cause a shift in the base.

When To Do a Shadow Root

A shadow root can ultimately be leveraged in all of the same situations as a root smudge. Clients with darker hair, such as brunettes, who want their hair lightened but also want to maintain some depth, want an easier grow-out period with less maintenance, or who want a more lived-in color can all be excellent candidates.

So, what’s the difference between a root smudge and a shadow root?

If those two techniques sound rather similar, good observation! That’s because, ultimately, a root smudge and a shadow root are essentially the same technique, leveraged in different ways to achieve different results.

Both techniques are concerned with blending a client’s root with the shaft of their hair in order to soften the line of demarcation, typically by tapping your formula at the root. The key difference is that in a shadow root, the difference in color between the root and shaft is typically more dramatic than in a root smudge. A shadow root can also be much lower than your standard root smudge, providing more depth to the finished result.

At the end of the day, it’s important to recognize that there are tons of different ways for a stylist to express the same technique, both in terms of execution as well as wording. For that reason, it’s always a good idea to conduct a hair consultation with your clients before you sit them in the chair so that you can iron out any miscommunication and make sure you have an accurate idea of what they are hoping to achieve. Showing them pictures of both a root smudge and a shadow root, for example, will give them the opportunity to directly show you which result they are looking for, even if they used the wrong term. 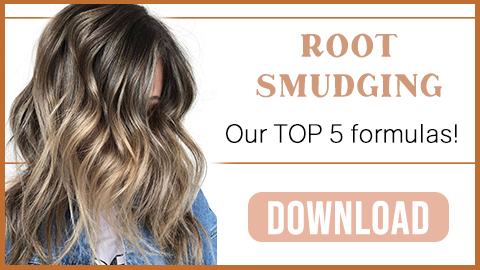 Listen to our latest episodes! Salon Software vs. Systems: What's Right For You? How to Protect Your Time and Money With Online Booking